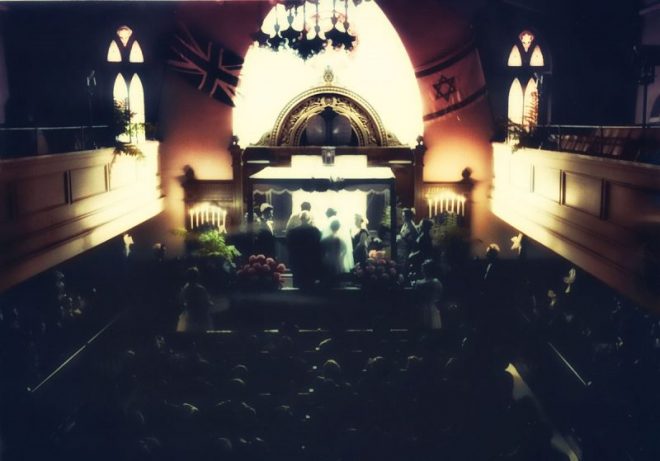 Beth Jacob’s humble beginnings date back to the year 1883 when a group of 20 Russian-born immigrants broke away from the Temple Anshe Sholom to form a more Orthodox minyan above Fearman’s Meat Market on MacNab Street North. In 1886 the group received its charter as a religious society, officially becoming known as Kahal Kodesh Bais Jacob.

In 1888 the budding congregation moved into its first real home: a white stucco, Gothic-windowed edifice on the northwest corner of Hunter and Park Streets, that had previously housed the St. James Reformed Episcopal Church.

At this point in its history, Congregation Beth Jacob, now commonly referred to as the Hunter Street Shul, was Orthodox, containing elements similar to other Orthodox synagogues of the same period: a bimah located in the centre of its prayer space surrounded by wooden pews, a women’s gallery, vestry rooms and a basement that housed a communal kitchen, a meeting place and a mikvah. Religious services were led by lay people and a hired cantor, whose role as Torah reader and Bar Mitzvah tutor was seen as much more essential than that of rabbi. In fact, it wasn’t until 1925 that a full-time rabbi was hired.

Over the next 25 years Beth Jacob occupied a central role in the lives of a new generation of members, who had learned Hebrew at its Talmud Torah, met their mates at its social events and who began to question some of the restrictions prescribed by orthodoxy.

By mid-century the thriving congregation had outgrown its home, and after many years of discussion a lot on the southeast corner of Aberdeen and Cottage Avenues was purchased. An ambitious building campaign raised funds for a modern 1400 seat synagogue, religious school facilities for 250 children, library, recreation rooms, daily chapel, rabbi’s study, administrative offices and banquet hall. The formal dedication of the new synagogue took place in April of 1956. By then Beth Jacob had cut its ties with the Union of Orthodox Jewish Congregations and affiliated with the United Synagogue of America, the home of the Conservative Movement.

The sands of time brought a shift in societal trends and changing priorities and, as in the past, there were many discussions concerning the need to upgrade the Aberdeen Street building, make the shul fully accessible and to have a sanctuary that reflected a different era and communicated a warmer, more heimish feel.

Beth Jacob’s “Shul within a Shul” Campaign was officially launched at High Holiday services in September 2008. The overwhelmingly positive response from both Beth Jacob congregants and the community at large was a testament to the meaningful role that our shul has played in the lives of Jewish Hamiltonians, present and past, over its 124-year history.

In January, 2011, 55 years after the glorious dedication of Beth Jacob opened its fabulous, new and accessible sanctuary and grand entrance off the Cottage Street parking lot.

We are all so proud of our beautiful new “Shul within a Shul.” Each of us can take pride in this achievement. Welcome to our new home!